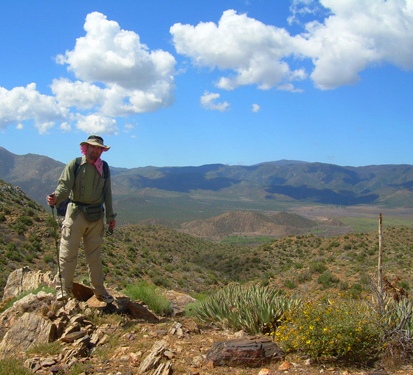 Hiking through the desert along the Pacific Crest Trail.

What an adventure it would be! Tramping through the deserts of Southern California, postholing through the snows of the High Sierras, through the lava fields and thick forests of the Cascade Range. What if I took photos along the route—thousands upon thousands of photos—and used them to allow people to virtually walk the trail. I loved the concept.

I didn’t know if I’d actually take the time to ever create such a website—I knew it would be a huge amount of effort to create—but I knew I wanted the photos. I could create the website (or not) anytime if I had the photos. If I didn’t have the photos, though, I wouldn’t be able to create such a website whether I later wanted to or not. So I committed myself to taking at least one photo for every mile of the 2,650-mile trail.

In total, I took about 5,000 photos as I walked from Mexico to Canada—an average of two photos per mile. Admittedly, many of them were blurry and not really useable. Other times, I took half a dozen photos of the same sunset which are more-or-less identical. But still, there was plenty to work with.

But I didn’t make the website. Not yet, at least. The time it would have taken to build such a website was substantial, and I couldn’t justify it. I had more than enough work to do on Atlas Quest, a letterboxing website that I had created and that actually paid my bills! I didn’t know if I would ever have the time or inclination to commit to building the walking website, but at least I had the photos I’d need if I ever did.

Fast forward a bit further, I created The Soda Can Stove website—which is basically how to build a stove made out of soda cans. I’ve been quite fond of those little things in my backpacking adventures, so I threw the soda can stove website together in about a week. Actually, to call it a ‘website’ is rather generous. In truth, it was a three-page website. Three whole pages of content! I did it for the love of soda can stoves, but I went ahead and threw on a few Google Ads. It cost me nothing to join Google AdSense, so why not make a few bucks from it? 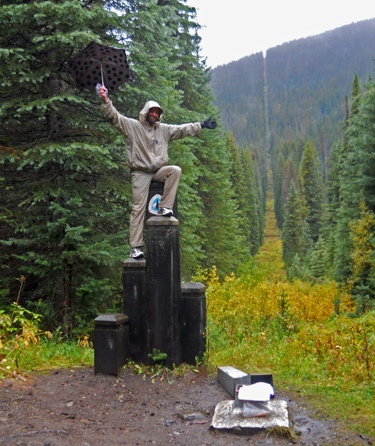 My idea for a walking website wouldn’t be possible without photos, so it wasn’t until I reached the end of the Pacific Crest Trail at the Canadian border (that cut through the trees) before this website would even be possible!

I largely forgot about that website and continued on with my life, which included a thru-hike of El Camino de Santiago where I took a minimum of at least one photo for every kilometer of the trail. (In Europe, they measure distances in kilometers, not miles.) I still had that walking website on my mind, so once again, I took photos to thoroughly document every kilometer of the 1,000-mile trail.

I still didn’t know if I’d ever make the the ‘walking website’ (as I started calling it in my head), but now I’d have images to create two routes! (Eventually, when I did create this site, I decided to break the Camino into two separate hikes: the Chemin Le Puy and the Camino Francés since most people consider the two separate trails and even guidebooks are broken down into one or the other.)

Then, a couple of years after I first created that soda can stove website, I looked at the revenue generated from it and was stunned—stunned!—at how well it was doing. In absolute terms, I certainly wasn’t going to retire from it, but for a website with three measly pages and only a couple hundred visitors per day, I was genuinely shocked at how well it was doing.

So I started thinking about that walking website again. Maybe if I put Google ads on it, it might be worth the time and effort to implement the idea? So finally, nearly three years after I first thought of creating Walking4Fun.com, I finally created it.

Six years after I originally launched Walking 4 Fun, I introduced a premium membership. The ads really haven’t done as well as I had hoped and for the amount of time and effort I’ve put into this website, it really needed to show a better return. Walking virtual trails is still free with an advertising-based model, but premium members have access to newer features such as videos and don’t have to look through advertisements!

So that’s the backstory to Walking 4 Fun. The fresh air, the exercise, and the joy of walking—it’s something I wish everyone could enjoy. So get out there and start walking! =)