The Pacific Crest Trail, also known as the PCT, is the premier hiking trail in the western United States stretching from the Mexican border to the Canadian border, traveling through severe deserts, among the highest peaks of the contiguous United States, alongside snow-capped volcanoes, lush forests, and bubbling hot springs. Much of the trail is extremely remote—one segment through the High Sierras has over 200 miles of trail without a single road crossing. The deserts of Southern California can be brutally hot with nothing more than an occasional a Joshua tree for shade. The elevation ranges from just above sea level at the Columbia River to 13,153 feet (4,009 m) at Forester Pass. This is a wild trail of breath-taking beauty and unforgettable scenery.

Interested in reading about my hike? I blogged about it at Another Long Walk, or click through to the table of contents. Be warned: the blog is poorly edited! It’s hard to write well with limited computer time while thru-hiking a backcountry trail! 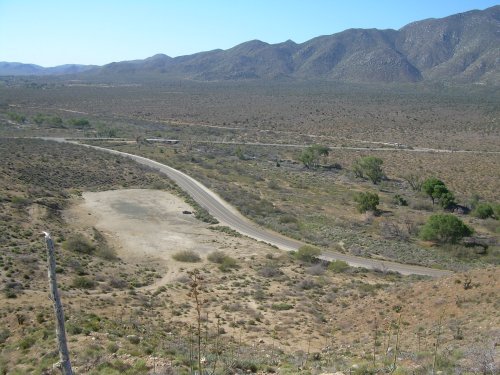 The first 700 miles (1,100 km) or so of the PCT runs largely through deserts that can be brutally dry and hot. Several sections have no water at all for more than 20 miles (32 km)—and you’ll need to carry a lot of it when temperatures soar to 100°F (40°C). There are a couple of sections at higher elevations where snow can be problematic—Fuller Ridge in the San Jacinto Mountains had thru-hikers worried about the heavy snowpack and many took a road detour to avoid it. I charged ahead, however, and went straight through the snow under the assumption that if I couldn’t handle Fuller Ridge, I had no business entering the High Sierras later where record snow levels were being reported.

The year I hiked the trail, 2010, there were two official detours from the PCT due to fire damage: the Sheep Fire and Station Fire detours. For those of you familiar with the PCT’s routes, that’s why you’ll see this version of the trail running through places like Devils Punchbowl and through the town of Pearblossom—places where the official PCT does not normally go through. The Sheep Fire detour was relatively quick and lasted part of an afternoon, but the Station Fire detour was 50 miles long and took three days of road walking to complete. 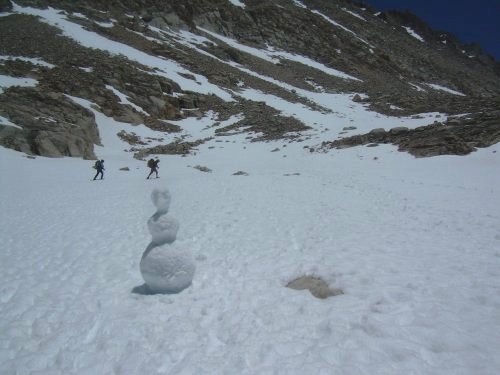 This section of the PCT runs the length of the Sierra Nevada Mountain Range, roughly from Kennedy Meadows in the south to Lake Tahoe in the north. This section, without a doubt, is the toughest and most extreme sections you’ll find on the Pacific Crest Trail. For thru-hikers, there’s still a lot of snow in the High Sierras, which—by all accounts—was way above average the year I hiked it. The trail peaks at the 13,153-foot Forester Pass, but an eight-mile side trail leads to Mount Whitney, the highest point of the contiguous United States, and nearly all thru-hikes make the quick afternoon jaunt to bag this peak, myself included.

In my opinion, this is the most beautiful section of the entire Pacific Crest Trail, but at the same time, the snow was enormously demoralizing. At one point, the postholing became so bad, I actually started crawling across the snow on my hands and knees. That didn’t even prevent the postholing completely—more than once, my arm postholed and my face took a hit in the snow. There’s a 200-mile (320 km) section along this stretch without a single road crossing making it the most remote section of the trail. Fortunately, for you, these challenges are a lot easier since your walks are virtual, but if you really want to get into the spirit of things, do your real-life walks through deep snow and temperatures that are so cold as to freeze your shoes solid. 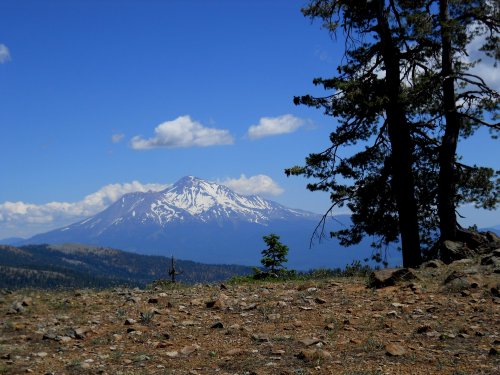 I grew up in California and thought I knew everything that California had to offer, but I was absolutely stunned at how amazing the Northern California section of the trail was through the Trinity Alps and Russian Wilderness. Absolutely beautiful, absolutely awesome. The trail is also well-graded and remarkably flat through most of this section, a pleasant change from Central California. And by the time we reached this area, almost all of the snow had finally melted from the trail. Oh, there were spots of the white devil—to be sure—but nothing substantial and nothing deep enough to cause postholing.

The trail passes through Lassen National Park, a noteworthy locale for it’s abundance of thermal features including Boiling Springs Lake which is one of the largest hot springs in the world and is surrounded with mudpots and fumaroles.

The trail veers west of Interstate 5 just south of Dunsmuir and stays on the west side through the rest of California, looping around Mount Shasta and the beginning of the Cascades Mountain Range. 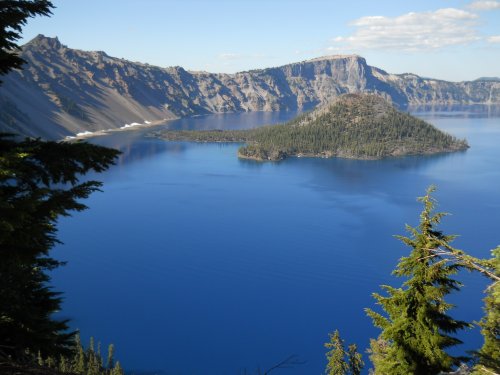 The trail crosses back east of Interstate 5 shortly after it’s arrival into Oregon and follows the Cascade Range to Crater Lake, then past a series of impressive volcanic mountains: Mount Thielsen, the Three Sisters, Mount Washington, Three Fingered Jack, Mount Jefferson and Mount Hood, all of which are stunningly beautiful.

Wildfire detours are common for thru-hikers along the Pacific Crest Trail each year, and it was no exception for me. There was one ‘unofficial’ reroute of the PCT when I hiked the trail because of active wildfires burning in the Olallie Scenic Area. The PCT was closed, and I call it an ‘unofficial’ reroute because an official one had not actually yet been created. A sign at the trail closure suggested two possible options along roads, and I followed one of them around the wildfires then made up my own reroute which involved cross-country travel with nothing by my wits and my compass to get back on the PCT sooner than either of the suggested route options provided. 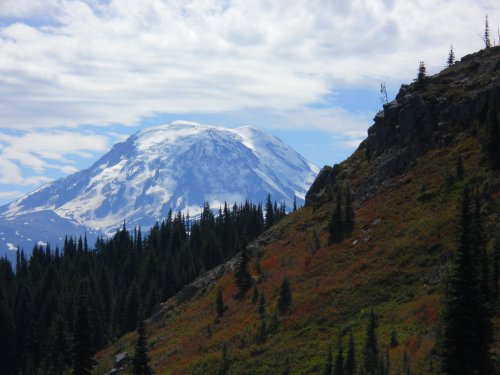 The trail crosses the Columbia River Gorge on the Bridge of the Gods—which marks not only your entry into Washington state, but also the lowest point of the Pacific Crest Trail. It continues along the spine of the Cascades Range, passing by Mount Adams, through the Goat Rocks Wilderness, Mount Rainier, Alpine Lakes Wilderness, Glacier Peak and the North Cascade before reaching the Canadian border. The year I hiked it, it rained a lot in Washington. Very demoralizing, very wet and not a lot of fun to tromp through. And it even snowed lightly the day I arrived at the Canadian border.

From the Canadian border, the nearest trailhead is another 7 or so miles into Canada at Manning Park, and with proper permits already filled out and approved, it’s perfectly legal to walk across the border into Canada. (It’s never legal to walk from Canada into the United States—the United States has no system in place to allow that.) So that’s what I did, and the photos for this hike will take you all the way into Manning Park. For those without the proper permits or couldn’t get pre-approved into Canada, they would have to backtrack a couple of days to Harts Pass—the last road crossing before Canada. You won’t be doing that for this hike, though! 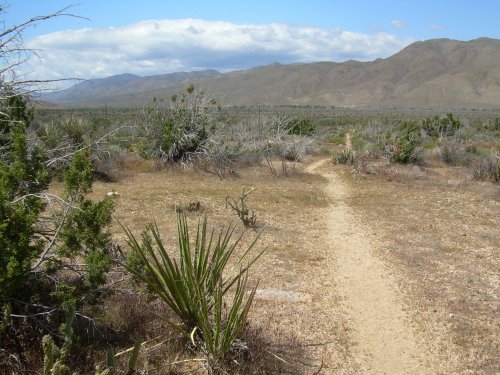 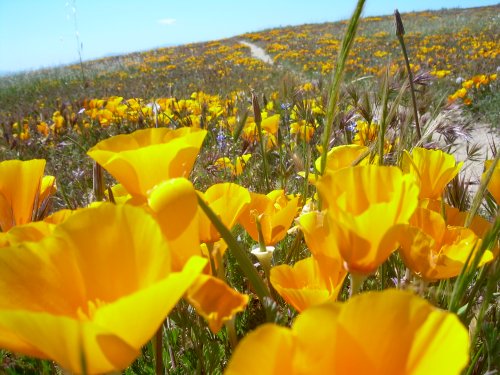 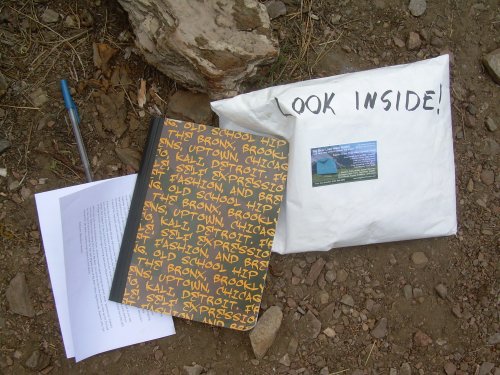 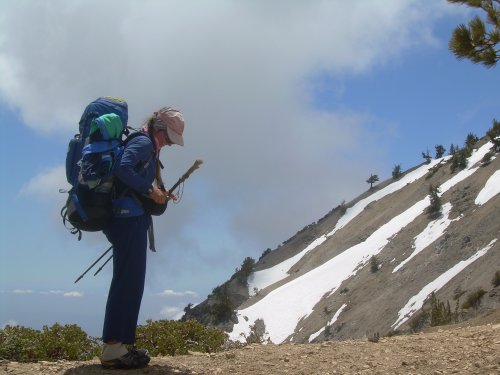 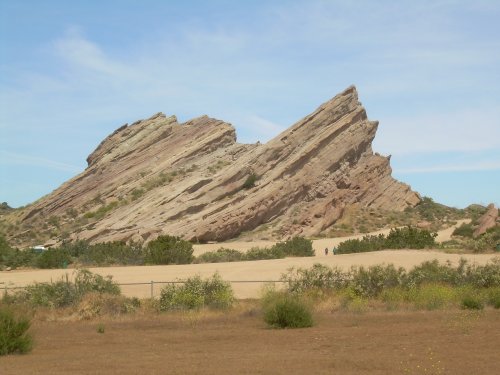 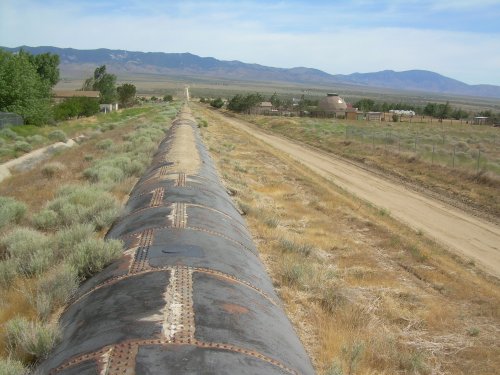 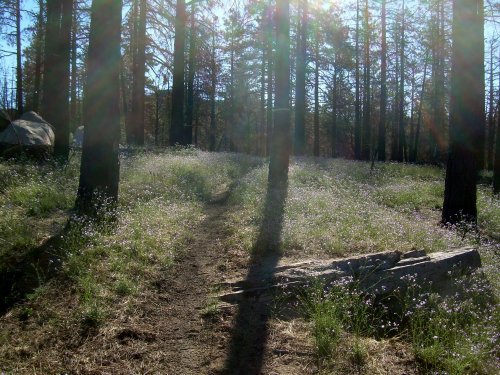 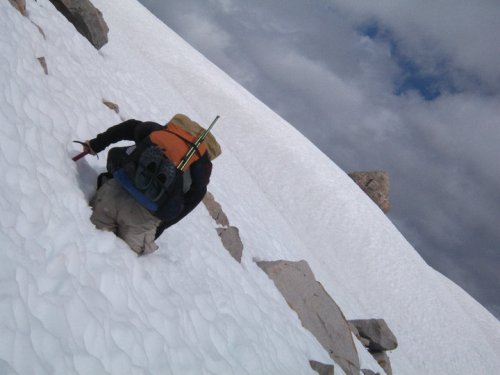 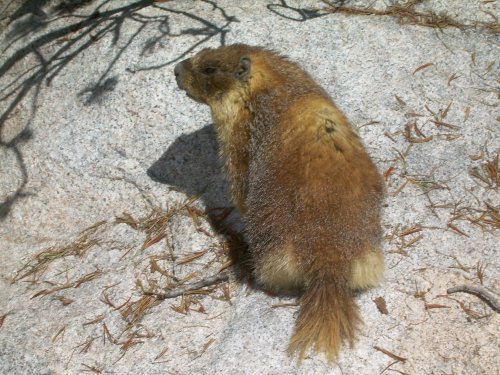 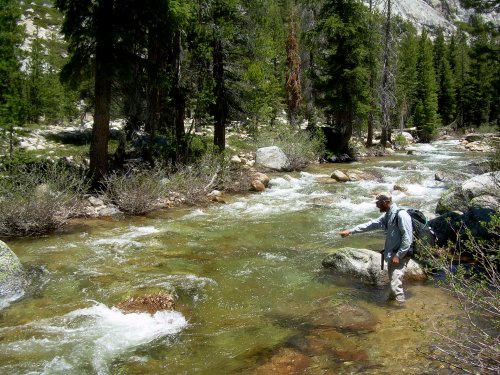 Pacific Crest Trail @996.5 miles
Half-Ounce searches for a place to ford the river 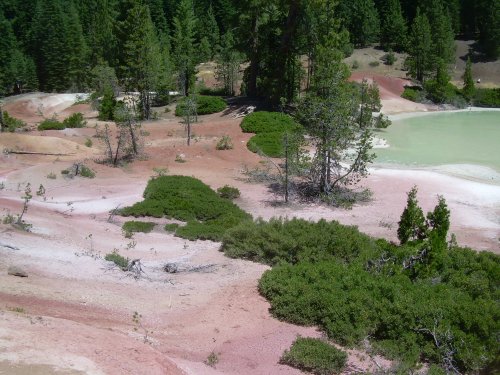 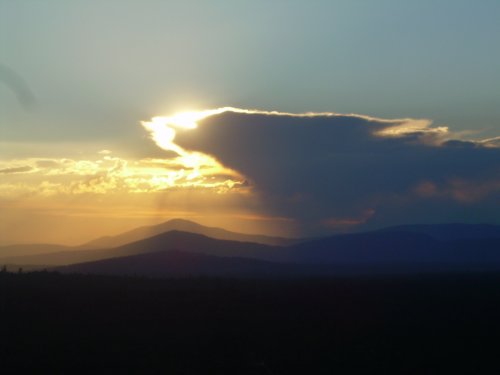 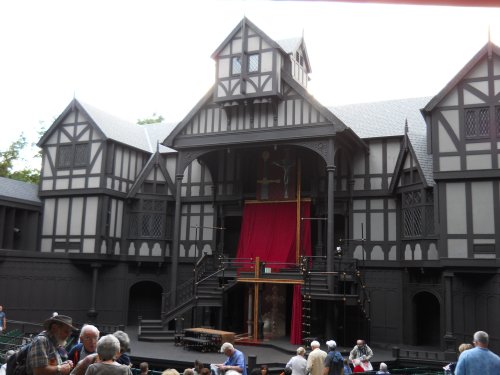 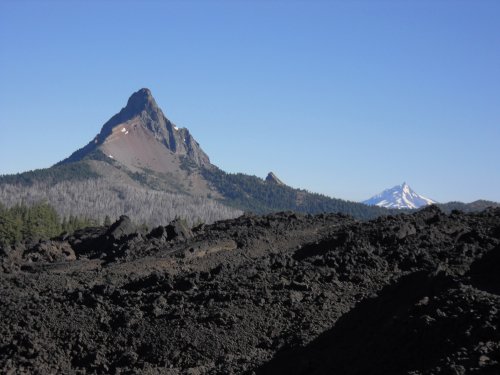 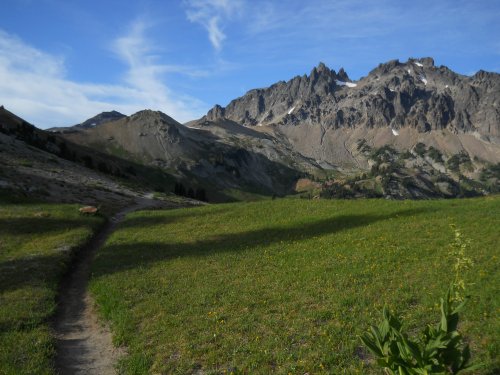 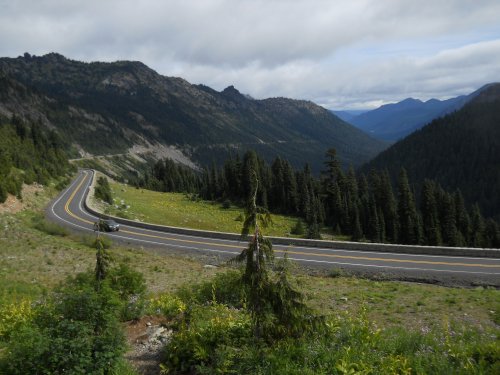 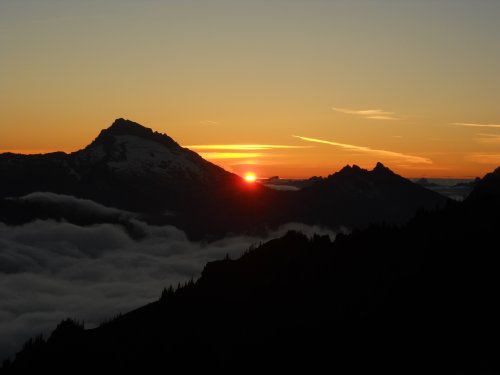